Turs are the largest herbivores in the Caucasus and live on forested and rocky slopes between 800 and 4,000 m. They are endemic to the Greater Caucasus mountain range, spanning south-west Russia, Georgia, Armenia, north-east Turkey and Azerbaijan (Fig. 1). The Caucasian Turs are split into two species, the Western Tur (Capra caucasica) and the Eastern Tur (Capra cylindricornis) based on morphological characters, especially horn shape. However, biology and behavior of the two are thought to be identical. Of the seven currently recognized Capra species, these are the ones with the smallest geographic range. 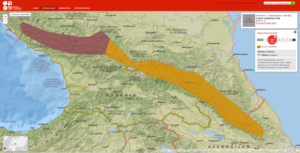 Fig 1: Geographic range of Western (red) and Eastern turs (orange) in the Caucasus. Adapted from © IUCN

With our project we aim to understand the evolutionary history of these two species. It has often been proposed that Eastern and Western turs hybridize to a large extent, and that intermediate phenotypes exist within a broad area where the two species meet. However, previous analysis of maternally inherited mitochondrial genes did show contradictory results, depending on the choice of specimens and genetic markers: some studies showed that Eastern and Western turs are clearly separated (Manceau et al. 1999, Kazanskaya et al. 2007) while others found one or both species to be paraphyletic with respect to each other and/or to Caucasian wild goats (Pidancier et al. 2006, Gebremedhin et al. 2009, Zvychaynaya 2010). The paternaly inherited SRY gene on the other hand shows that Caucasian turs in general are a monophyletic group, but the two discribed species cannot be be distinguished (Zvychaynaya 2010).

We want to investigate the taxonomic status and population status of the two Caucasian Turs Capra caucasica and C. cylindricornis by analyzing a large set of bi-parentally inherited nuclear genes. The analyses will be based on museum specimens with known geographic provenance. In addition, several suspected fossil tur skulls (fragments) from carst caves in Western Georgia (20-50 kya) that represent remains of human food will be included in order to identify them and for testing recent hypotheses on the evolution of the genus Capra in general (Zvychaynaya 2010).

The morphological diversity in terms of skull and horn shape was investigated in a MSc Project by Kai Caspar (University of Bonn). He studied skulls of Capra caucasica and Capra cylindricornis in museum collections in St. Petersburg, Karlsruhe, Bonn, Berlin, Dresden, Frankfurt, Munich, Vienna, and Stuttgart. In addition to measurements and photographs for morphometric analyses he also collected bone samples of selected specimens for molecular analyses.

38 samples of C. caucasica and 21 samples of C. cylindricornis, plus several fossil samples and representatives of the other species in the genus Capra will be sequenced using hybrid-enrichment techniques. This method allows for successfully sequencing highly degraded DNA. The subsequent analysis will be conducted by two MSc students, one from Ilia State University (Tbilisi, Georgia) and one from University of Bonn (Germany).