Caucasian tur are large-bodied wild goats exclusively occurring in the Greater Caucasus mountains. Traditionally, these animals are grouped as two parapatric species, C. caucasica in the West and C. cylindricornis in the East, which are assumed to hybridize at the shared boarder of their ranges East to the Elbrus massive. While remarkably similar in general morphology and ecology, these two groups differ profoundly in the males’ horn shape. However, horns intermediate in shape between C. caucasica and C. cylindricornis occur in the assumed hybrid zone, generating a latitudinal cline. Tur taxonomy, similar to that of other wild goats, is not consolidated and it remains unclear if the mentioned groups represent distinct species or result from clinal variation within just one. Data on tur genetics are scarce and morphological studies were so far unable to fully resolve the problem of species delimitation in tur.

In my thesis I show that C. caucasica and C. cylindricornis are distinct taxonomic entities by reevaluating published reports and by applying morphometric methods to the largest sample of crania of these wild goats yet studied. For this, material from nine European museum collections in Austria, Germany and Russia was studied, resulting in a sample of 107 skulls. Although a notable overlap in morphometric trait variance is observable, the two species can clearly be separated in a discriminant function analysis and display several diagnostic traits which distinguish them from each other. This pattern was recovered for males as well as for females, which in the past have often been ignored in goat taxonomy.

Due to their rareness in museum collections, my study did not include evident interspecific tur hybrids. Therefore, it has to be assumed that the observed trait variance overlap derives from the close phylogenetic affinities of the two groups. This hypothesis conforms to recent molecular phylogenies. These suggest that C. caucasica and C. cylindricornis represent very recently split sister species, separating just a few 100.000 years ago. Skull morphology in tur does not vary in the same fashion has horn shape, which follows a recognizable latitudinal cline. Instead, individuals originating from identical localities can differ greatly in their craniomorphometric traits. The inconsistent pattern of horn shape and cranial character variability in tur suggest a complex phylogeography strongly affected by genetic drift.

Apart from that, my thesis explores applications of 2D and 3D landmark analyses in wild goat taxonomy, the latter one based on photogrammetric models. While the 2D approach was found to be unsuitable to study this morphologically rather uniform group, 3D landmark analysis provided promising results and should be considered for similar projects.

Further genetic analyses will soon be performed on tur tissue samples, mostly taken from the morphometrically examined specimens. It will provide valuable insights into tur phylogeny to complement the morphological results presented in my thesis and to test several hypotheses on tur biogeography. After conjoining the molecular data with the results from morphometry, this combined dataset will significantly enhance the current understanding of the evolution of these enigmatic mountain ungulates. 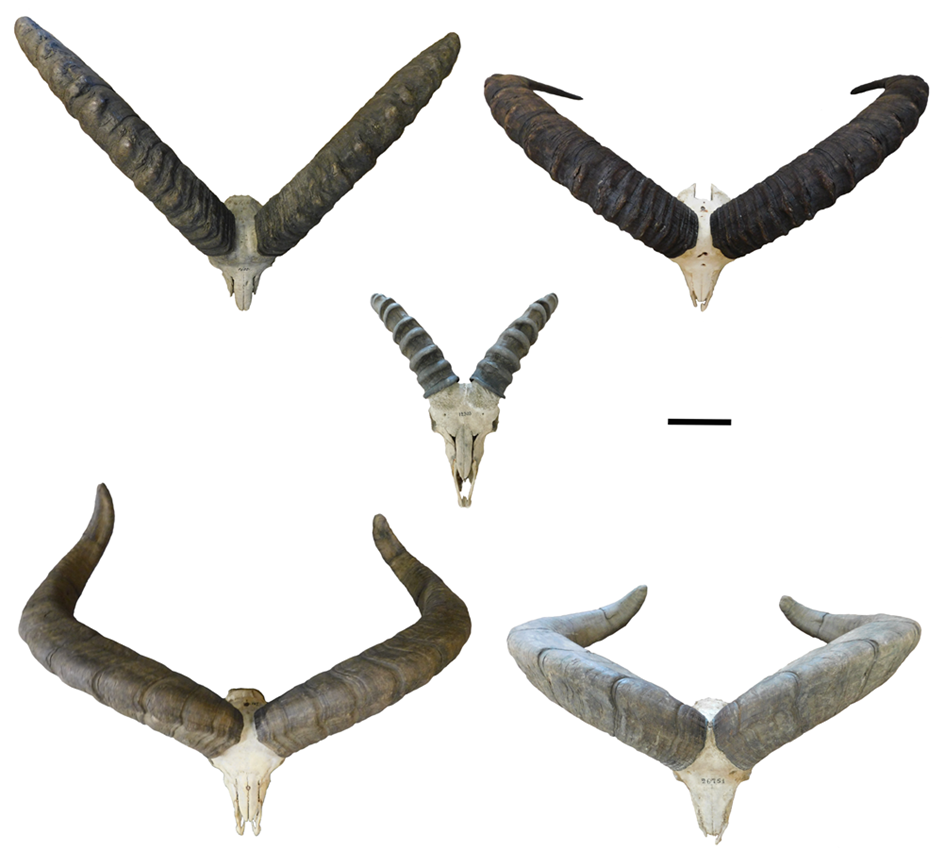